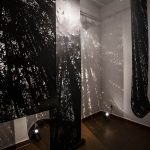 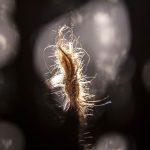 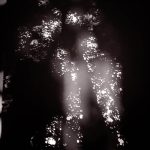 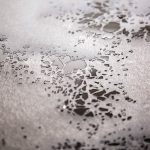 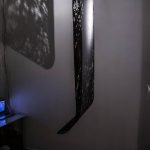 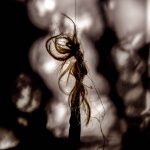 Beholding nature, we can reach a deep transcendence in which we feel certain roots and humility in the face of that which transcends us.

Irish artist Alannah Robins approaches the theme of transcendence as an absolute immersion in nature, calling most often upon the media of drawing, paper cuts and light. In her installations, she draws our attention to a transcendental philosophical moment related to nature, which she observes and perceives, inviting us to observe and perceive.

She is fascinated by metamorphosis, as a kind of merging with nature, because transformations are inherent in nature. She often links the metamorphosis itself to Ovid’s Metamorphoses, where people are silenced through transformation into trees/plants/birds as a kind of retribution. The artist points to the echoes of silencing in the colonisation of indigenous nations, where a native language was suppressed in order to uproot a population and to disconnect roots. However, she also puts transcendence in the context of the interpretation of the French philosopher Maurice Merleau-Ponty, who emphasised the importance of human physicality in the 20th century.

For this exhibition at Altán Klamovka, this philosophical link is shifted towards the American philosopher and ecologist David Abram, who points out that it is possible to move from our mind, i.e. reason, to our natural environment and perceive with the body returned to the sensory world. Another inspiration for the site-specific installation at Altán Klamovka was the British writer, artist and mythologist Martin Shaw, who points out the difference between ‘seeing’, when we only judge the facts, and ‘beholding’, which awakens curiosity and builds stories. The chosen name of the installation Behold opens up a space for experiencing the miraculous and bearing witness to this grace. Intricate paper cuts and light work with Alannah Robins became the starting point for the installation, where the artist immersed herself in the natural world, in the presence of tall trees. Alannah has created work which absorbs the viewers and returns to the feeling of being rooted to the earth, as a symbol of creation and a certain healing in the context of ongoing climate change. By playing with alternate vanishing points, she invites us to move through a space and to become absorbed by nature.