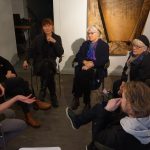 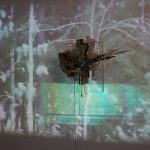 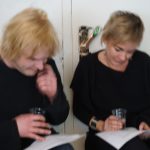 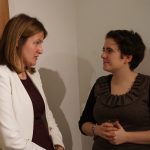 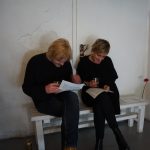 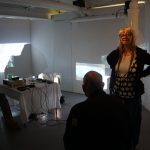 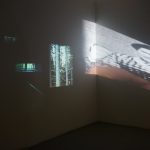 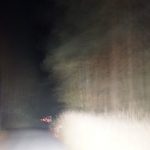 in collaboration with Ewert Ekros

Carrying the Songs is a project which has its genesis in Norn, a small, isolated community in Dalarna. Ewert Ekros and Alannah Robins have gathered visual and audio material, focusing on stories which bore a strong link to the landscape in this area.

The artists are concerned with what happens to a story when it is removed from its place of origin, when those who tell and retell migrate, and all terms of reference and context are absent. As part of the working process, the stories have undergone a processing through the mouths and ears of people spread around Sweden in an extended game of Chinese whispers. The distortions which have taken place have been characterised by individuals’ own experiences, memories, and by translations.

At Detroit gallery, these stories resonate and overlap in a film and sound installation. Visual references take the form of film, shadow puppetry and drawing.

The title of the exhibition is borrowed from the Irish poet Moya Cannon. The epigraph with which Cannon begins the title poem of Carrying the Songs—“Those in power write the history, those who suffer write the songs” (Frank Harte) — prepares the reader for a collection that chronicles the suffering that emigration and colonization have produced, by means of the songs that have emerged from the suffering.

It was always those with little else to carry
who carried the songs
to Babylon,
to the Mississippi –
some of these last possessed less than nothing
did not own their own bodies
yet, three centuries later,
deep rhythms from Africa,
stowed in their hearts, their bones,
carry the world’s songs.

For those who left my own county,
girls from Downings and the Rosses
who followed herring boats north to Shetland
gutting the sea’s silver as they went
or boys from Ranafast who took the Derry boat,
who slept over a rope in a bothy,
songs were their souls’ currency
the pure metal of their hearts,

to be exchanged for other gold,
other songs which rang out true and bright
when flung down
upon the deal boards of their days.
MOYA CANNON

Link to film of installation

Thank you to Culture Ireland for their support.