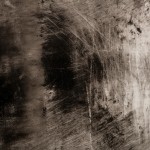 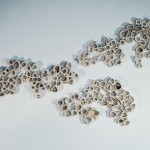 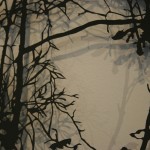 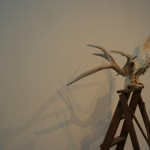 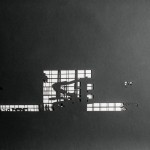 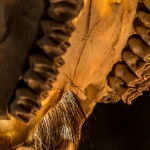 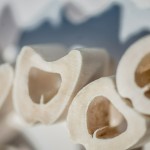 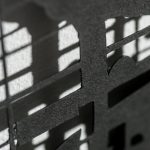 ‘The bees build in the crevices of loosening masonry’- WB Yeats, The Stare’s Nest By My Window

Drawing on familiar images, Alannah Robins explores our heritage of myth and memory. She has an instinctive, play-like, approach to the work, in which previously unrelated images conjoin to suggest deeper, unconscious layers of meaning. The resulting objects or images trace an interior landscape,  and with it recurring themes of identity, sexuality and a man’s relationship with nature.

Through  various processes of reduction Alannah explores the entity of ‘Förort’, ‘The Suburb’. She reflects on the suburb as an in between place, a place where immigrant communities build, in the crevices between nature and the city. Both in English and in Swedish the suburb is named as an place under or inferior to the city. The Swedish word describes a place before the place itself.

Alannah uses the bones of the elk, the great romantic symbol of Sweden, to reflect on in between places. She slices, stitches together and  inverts the skeleton, all the time using shadow as a reminder of an absence. Painting on clinical white tiles, she removes and reduces the ink to create a collage of suburban images. She repeatedly references Alla Helgons Dag, and that 1st November practice of lighting graves with candles, another homage to an in between world. This process of reduction, and that of cutting away paper to create stark shadow puppet images suggest an attempt to reach the bare essence of a subject. This work is placed with the bare bones of the elk in a dimly lit November room full of shadows.

This exhibition sees a new collaboration between Alannah Robins and Ewert Ekros. In the sound installation Bina Bygger i Sprickorna, the original Yeats poem, The Stare’s Nest by My Window, is layered with Thomas Sjösvärd’s Swedish translation of the same. These are further layered, creating a kind of musical conversation, with excerpts from Lollo Collmar’s radio documentary on Återvändare. We hear the teenage voices of  immigrant populations of the Göteborg suburbs teasing out this sensation of not quite belonging, of being caught between cultures or lands. The reading in an Irish voice of a Swedish translation of an Irish poem , and the reading of the original in a Swedish voice further explore this state of displacement. Ewert’s spare musical technique of scraping back to the bare essence underlines Alannah’s aesthetic.