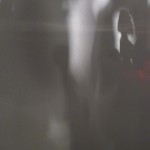 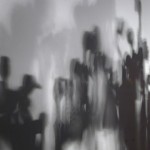 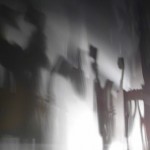 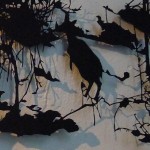 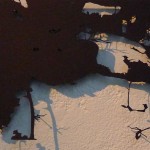 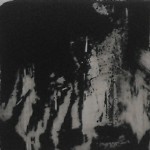 Alannah Robins’s multimedia installation combines video with a large gathering of used toothbrushes. These have been gathered from friends, colleagues and extended networks throughout Europe, with the previous owners carefully documented. The groups of toothbrushes loom in a sensitively lit space, the large beautiful shadows becoming almost more important than the objects themselves. Robins deals in shadows and reflections, her shadow puppets of woodland and suburban life stand a centimetre from the wall, and make a delicate play of light on the background. A camera trained on a neighbour’s apartment in the falling snow overlays reflections and sounds of mundane domestic life in an interior. This show sees a new collaboration with Sören Runolf who’s improvised electronic and acoustic sounds intensify the atmosphere of this compelling installation.

This exhibition concerns the ideas of burial, memory and identity. It also touches on worlds both communal and internal.

Regions of the Near East, specifically Tell Brak, in the Khabur of North Syria and of Çatalhöyük, SE Turkey have historically been home to traditions of intramural infant burials. Here children are found buried in hearth and oven areas in the houses. *

To fill an object with soil seems to be an act conversely connected with the act of burial. The burial of these children under the hearth was an act that kept the children at the heart of the home. The filled object, however, remains portable. The object filled with soil bears resonances of emigration,  the desire to carry some symbol of homeland, and perhaps membership of a migrant group.

The toothbrush is an intimate but non-personal object. Grouped together and partly buried in soil, they create their own visual rhythm with resonances of suggested intimacies and connections. The worn out bristles bear the imprint of use and personal geography.

The Irish blind wandering poet Antoine Ó Raifteirí is often described as the last of the wandering bards. He wrote in the 18th century his poem Máire ní Eidhin in praise of the great beauty of this woman. His words drove men out of their minds, some meeting death by drowning. This poem, when reconciled with his blindness, evokes notions of a lucid inner vision and in WB Yeats’s poem Mary Hynes, he is compared with Homer, and she with Helen of Troy. In this exhibition evocations of an inner vision emerge in a play on interior and exterior worlds, with references to reflections and images viewed through windows.

*” While elders and established members of previous generations are integral to the concept of tradition, how then, does the role of children play in the negotiation of memory, identity and maintaining the past through lives cut short? [I believe] the answer lies in part, in the social constructs of membership; within Çatalhöyük’s society as well as external to it.” Sharon Moses, Cornell University, The Children of Neolithic Çatalhöyük: Burial Symbolism and Social Metaphor.

Link to film of Migrant